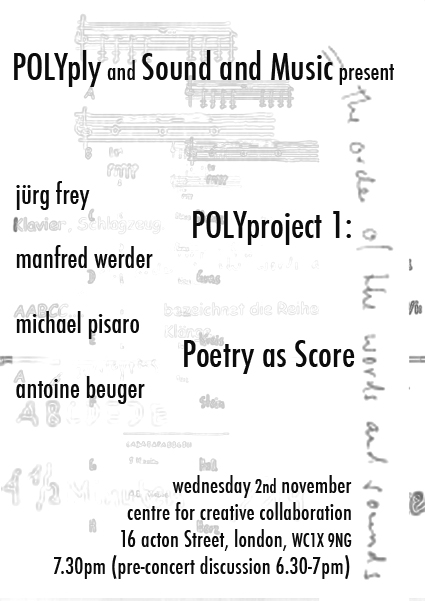 Antoine Beuger studied composition with Ton de Leeuw at Sweelinck Coservatorium in Amsterdam 1973-78. In 1990 he began composing after an interruption of about 10 years. Two years later he founded Edition Wandelweiser together with composer/performer Burkhard Schlothauer. Since 1994 he’s been active with the conception and organisation of KLANGRAUM, a concert series at Kunstraum Düsseldorf. During the years 1995-2001 he was working together with visual artist Mauser as artistic director of “Werkraum”, Place for Interdisciplinary Artistic Events, Cologne. Since 1996 he’s been artistic director of edition wandelweiser records and since 2004 managing director of Edition Wandelweiser gmbh.

Jürg Frey developed his own language as a composer and sound artist with the creation of wide, quiet sound spaces. He has worked with compositional series, as well as with language and text. Some of these activities appear in small editions or as artist’s books as individual items and small editions. (Edition Howeg, Zurich; weiss kunstbewegung, Berlin; complice, Berlin). His music and recordings are published by Edition Wandelweiser. Jürg Frey is a member of the Wandelweiser Komponisten Ensemble which has presented concerts for more than 15 years in Europe, North America and Japan.

Michael Pisaro is a composer and guitarist, a member of the Wandelweiser Composers Ensemble and founder and director of the Experimental Music Workshop. His work is frequently performed in the U.S. and in Europe, in music festivals and in many smaller venues. He has had extended composer residencies in Germany (Künstlerhof Schreyahn, Dortmund University), Switzerland (Forumclaque/Baden), Israel (Miskenot Sha’ananmim), Greece (EarTalk) and in the U.S. (Birch Creek Music Festival, Wisconsin). Concert length portraits of his music have been given in Munich, Jerusalem, Los Angeles, Vienna, Merano (Italy), Brussels, New York, Curitiba (Brazil), Amsterdam, London, Tokyo, Austin, Berlin, Chicago, Düsseldorf, Zürich, Cologne, Aarau (Switzerland), and Several CDs of his work have been released by such labels as Edition Wandelweiser Records, Compost and Height, confront, Another Timbre, Cathnor, Nine Winds and others, including most recently “transparent city, volumes 1–4″, “an unrhymed chord”, “hearing metal 1”, “A Wave and Waves” and “harmony series (11–16)”. His translation of poetry by Oswald Egger (“Room of Rumor”) was published in 2004 by Green Integer. He is Co-Chair of Music Composition at the California Institute of the Arts near Los Angeles.

Read review of the ‘Poetry and Score’ POLYproject  here:
http://www.thewatchfulear.com/?p=6160

What is Field? Michael Pisaro and the Poetics of Geo-sound

This event was an exploration of the intersection of composition, text and field recording. American composer Michael Pisaro, a member of the Wandelweiser collective, spoke about his recent CDs July Mountain (the score of which develops from a poem by Wallace Stevens) and Crosshatches, a collaboration with Japanese sound artist Toshiya Tsunoda. A panel of respondents provided comment on the work presented: architect Paul Bavister (UCL/ Bartlett) and poet-critics Carol Watts (Birkbeck) and Drew Milne (Cambridge).

Transcripts of parts of this event are available in issue 5 of the journal Wolf Notes. 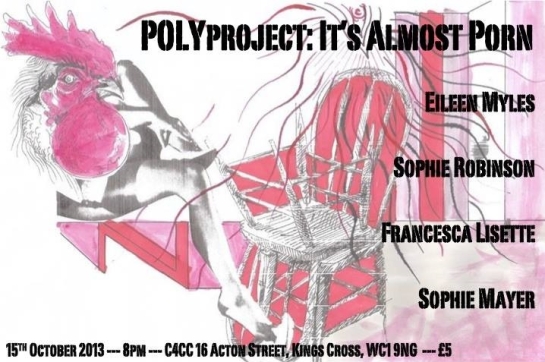 Eileen Myles: works include Chelsea Girls (Black Sparrow Press, 1994), Cool for You (Soft Skull Press, 2000) and Inferno – a poet’s novel (OR Books, 2010) alongside anthologies such as Not Me (Semiotext[e], 1991), Maxfield Parrish (Black Sparrow, 1995) and most recently Snowflake/Different Streets (Wave Books, 2012) and a body of critical work, of which a selection is collected in The Importance of Being Iceland (Semiotext[e], 2009). 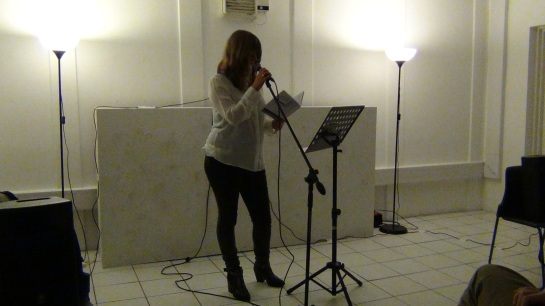 David Dunn is a composer who primarily engages in site-specific interactions or research-oriented activities. Much of his work is focused upon listening strategies and technologies for environmental sound monitoring in both aesthetic and scientific contexts. As a pioneer in the fields of acoustic ecology, bioacoustics, interspecies communication, and scientific sonification, he has composed a body of experimental musical work while contributing to projects as diverse as sensory enhancement of healthcare environments, intervention strategies for forest and agricultural pests, and investigation into the ultrasonic world beyond human hearing.

Will Montgomery teaches contemporary poetry at Royal Holloway, University of London and makes electronic music, sound art and field recordings. His musical pieces explore aural texture and narrative. He also constructs compositions from sequences of treated or untreated field recordings. He is interested in the acoustics of the built environment, particularly London. He has released three full-length CDs: Water Blinks (Selvageflame, 2005); non-collaboration [with Heribert Friedl] (nonvisualobjects, 2008); and Legend [with Brian Marley] (Entr’Acte, 2009). A piece assembled from recordings made on the Heygate estate in south London is released on vinyl by Winds Measure early in 2011 and his realisation of a score by Manfred Werder is out on Cathnor.
www.selvageflame.com

Carol Watts lives in London. Her poetry includes Wrack (Reality Street Editions, 2007), chapbooks When blue light falls (Oystercatcher, 2008, 2010), this is red (Torque Press, 2009) and brass, running (Equipage, 2006), and alphabetise, a book of prose chronicles exhibited in the Text Festival in 2005, now an eBook (Intercapillary Editions). A new collection, Occasionals, is forthcoming from Reality Street in 2011. Her recent work also involves mixed media – photography, drawing and collage. Horrid Massacre: A Récit, a sequence told through shopping receipts, is currently online in part at Ekleksographia. In 2009 she worked with choreographer Kate Johnson and film maker Roswitha Chesher on a live voice/dance collaboration, In the Fold at the Laban in London. She co-directs the Birkbeck Centre for Poetics and is director of the Voiceworks project.

Amy Cutler is a postdoctoral research fellow in the Environmental Humanities at the University of Leeds, with a PhD from the Social and Cultural Geography department at Royal Holloway University of London and previous degrees in English Literature from the University of Oxford. She researches historical geography, the cultural politics of landscape, and modern British poetry (both small press and large press), and also works independently as a curator and film programmer. Her cinema PASSENGERFILMS has won two national awards for its work with cultural geography, and in 2013 she curated the exhibition Time, the deer, is in the wood of Hallaig, on social and environmental memory. Her first chapbook was Nostalgia Forest (Oystercatcher Press, 2013), and her second chapbook, GLOSS, is forthcoming from Corbel Stone Press. She runs Land Diagrams, an online series of cross-disciplinary ‘twinned essays’ in geographical visualisation, and is currently developing research on echo and the sonic imaginaries of the forest.

Sarah Hughes plays zither and piano in improvising groups and as a founding member of the Set Ensemble, a group of musicians dedicated to the performance of contemporary composition.  She performs with long-term collaborators Patrick Farmer, Daniel Jones and Stephen Cornford and has also performed with musicians such as Antoine Berger, Michael Pisaro, Angharad Davies and Jurg Frey.  She has performed  internationally and has participated in various festivals such as Blurred Edges in Hamburg, NOW Now in Australia, i and e in Dublin, Sounds Like in Canada and Cut and Splice in London.
www.sarahhughes.org

Kostis Kilymis is an artist focusing on feedback systems and representation in musical performance and artistic practice. His main instrument is the mixing board through which he captures and manipulates electroacoustic phenomena, pre-recorded material and electronically generated sound. He has been an improviser, performer and collaborator -his encounters including Lucio Capece, Nikos Veliotis, Leif Elggren, Sarah Hughes, Stephen Cornford and Phil Julian amongst others. He curates the Organized Music from Thessalonki label. http://www.kostislikymis.com

Andrew Spragg is a poet and critic. He was born in London and lives there currently. His books include The Fleetingest (Red Ceiling Press, 2011), Notes for Fatty Cakes (Anything Anymore Anywhere, 2011), cut out (Dept Press, 2012), To Blart & Kid (Like This Press, 2013) and A Treatise on Disaster (Contraband Books, 2013). His writing was also included in Dear World & Everyone In It: New Poetry in the UK (Bloodaxe, 2013).

James Saunders is a composer with an interest in modularity. He performs in the duo Parkinson Saunders, and with Apartment House. He is Head of the Centre for Musical Research at Bath Spa University.
See www.james-saunders.com for more information.

Artur Vidal is a Spanish-born saxophone player and sound artist who grew up in Paris and currently resides in London. As such, he has performed and recorded extensively in the UK, France and Spain, as well as also being active in Turkey, Mexico or  Czech Republic.  His  work involves field recordings, sound walks, dance and improvisation, and he is an active member of the  improvised music scene, playing and recording with artists and musicians who include Grundik Kasyansky, Jennifer Allum, Ruth Barberan, and Sébastien Branche, with whom he makes up the improvising saxophone duo ‘Relentless’. He has currently completed an MA in Sound Arts at the LCC in London and started in 2013 an Mphil/PhD research  about the notion of silence in Improvised Music and Acoustic Ecology.
www.arturvidal.com 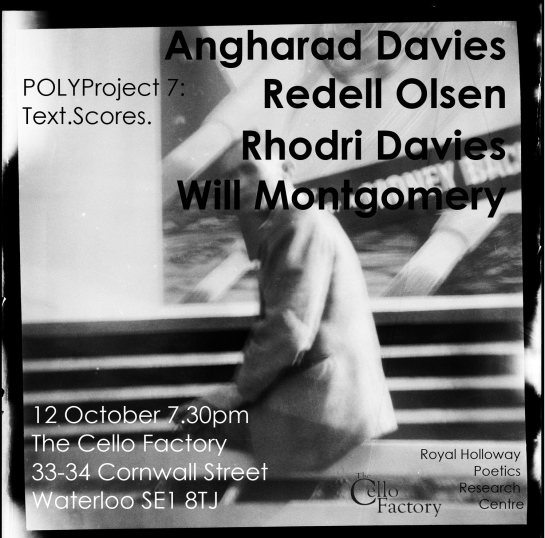 Realisations of scores by Davies, Olsen and Davies.

Angharad Davies is a violinist based in London. She is an active performer in contemporary, improvisation and experimental music both as a soloist and within ensembles. Since making London her base in 2002 she has developed a specific approach to the violin, extending the sound possibilities of the instrument by attaching and applying objects to the strings or by sounding unexpected parts of the instrument’s body. She is dedicated to exploring and expanding sound production on the violin.
angharaddavies.com

Redell Olsen is a poet and writer who publishes both academic and creative work. She is interested in the emerging critical space between these two disciplines as well as in interdisciplinary work between language and the visual arts.  Recent scholarly articles include essays on Frank O’Hara, Susan Howe and the film maker and poet Abigail Child. Her poetry publications include: ‘Film Poems’ (Les Figues, 2014), ‘Punk Faun: a bar rock pastel’ (subpress, 2012), ‘Book of the Fur’ (Rempress, 2000), ‘Secure Portable Space’ (Reality Street, 2004) and the collaboratively edited (with Susan Johanknect) ‘Here Are My Instructions’ (Gefn Press, 2004). From 2006 – 2010 she was the editor of How2 the online journal for modernist and contemporary poetry, poetics and criticism by women. Recent projects have involved texts for performance, film and site-specific collaboration and include: ‘Newe Booke of Copies’ (2009), ‘Bucolic Picnic (or Toile de Jouy Camouflage)’ (2009) and the collaboratively realised ‘The Lost Swimming Pool’ (2010). These texts were published as Film Poems (Les Figues, 2014). In 2014 she took part in the ‘Polar Muse’ exhibition at the Scott Polar Museum. She was one of a group of poets who installed their poems and texts on glass in the musuem. In 2013-14 she was the Judith E. Wilson Lecturer in Poetry at the University of Cambridge.
redellolsen.co.uk

Rhodri Davies is an improvising harpist who confronts traditional concepts of the harp through his use of preparations, detuned, bowed and e-bowed strings. Influenced by live electronics, music-concrete and electronica he is particularly interested in exploring noise, silence, texture and abstract sound on his acoustic instrument and especially working with musicians who utilize electronics. Regular Groups include: Broken Consort, Cranc, The Sealed Knot and Apartment House. In ad hoc groupings he has played with Christian Marclay, Sachiko M, Toshimaru Nakamura, Martin Tetreault, David Toop, Annette Krebs, Andrea Neumann, Otomo Yoshihide and John Zorn. He also performs and researches contemporary classical music.
rhodridavies.com

Will Montgomery teaches contemporary poetry at Royal Holloway, University of London and makes electronic music, sound art and field recordings. His musical pieces explore aural texture and narrative. He also constructs compositions from sequences of treated or untreated field recordings. He is interested in the acoustics of the built environment, particularly London. He has released work on the Entr’acte, nonvisualobjects, Cathnor and Winds Measure labels.
selvageflame.com